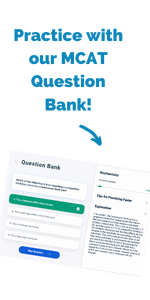 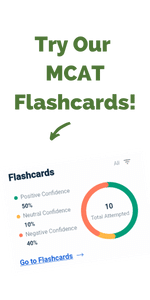 Which of the following best represents a Lineweaver-Burk plot for competitive inhibition?

a) The x-intercept shifts further from zero

b) The y-intercept increases

C is correct: The x-intercept shifts closer to zero.

The Lineweaver-Burk plot is a graphical method of analyzing the Michaelis–Menten equation and the enzyme-substrate-inhibitor relationship. The x-axis in the graph is 1/[S], and the y-axis is 1/V. In competitive inhibition, the inhibitor decreases the binding affinity for the enzyme to the substrate by competing with the substrate for the active site. This competition increases the Km, since it will take more substrate to outcompete the inhibitor and move the reaction forward. Increasing the Km will cause the x-intercept of the Lineweaver-Burk plot to shift closer to zero (choice A is incorrect). Answer choices B and D are incorrect, the y-intercept will not change.

What is a Lineweaver-Burk plot?

The reciprocal of this equation is:

From this, the Lineweaver-Burk equation becomes:

One thing to note about the Lineweaver-Burk equation is that when plotted as a graph, it is a linear line with the equation y = mx + b (Figure 1). As a line, interpreting the data points is straightforward. The Michaelis-Menten saturation curve, on the other hand, is more challenging to interpret at times due to the different data points and the hyperbolic nature of the graph.